History allows us to observe unaffected eyes, to see things our predecessors missed. It was not that they lacked our intelligence (to put it mildly), but rather that they were products of their time. Maybe after doing the exercise we can bring a similar mindset to today’s investments. Perhaps we can avoid getting too caught up in our particular moment.

With that in mind, let’s revisit the investment prices of the 1950s. The chart below shows the dividend yield on large corporate stocks for that year, as well as the interest rate paid by long government bonds. term and annualized inflation for the previous decade. 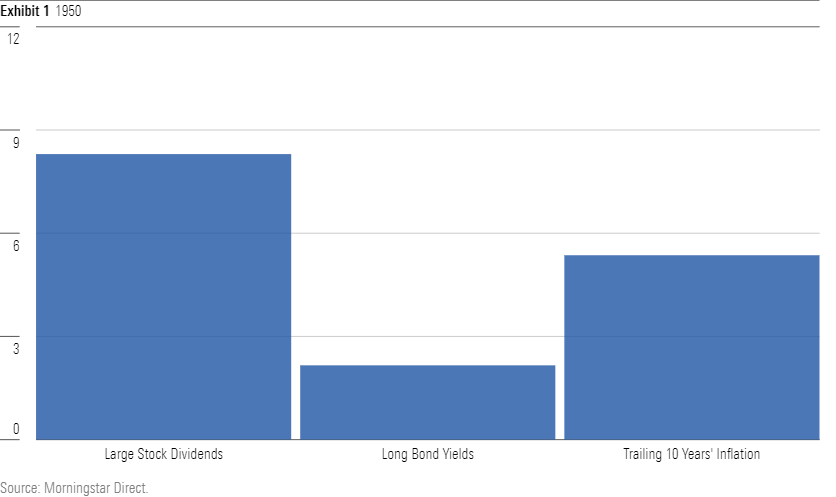 Wow! Inflation had averaged over 5% per year in the 1940s, yet American investors demanded only a 2% return on long bonds, which had no capacity to fight inflation. Meanwhile, shares of companies that could and did raise their prices in response to inflation, thereby increasing their profits, distributed 8%. At first glance, these figures seem to have had to be reversed. Bonds should have returned 8%, with stock distributions being 2%.

Clearly, investors in the 1950s had the Great Depression in mind. In the 1930s, any guaranteed income was a godsend, as stock dividends fell, many corporate bonds defaulted, and consumer prices fell rather than rose. With this in mind, a 2% Treasury payment was sufficient, while stocks had to distribute a much higher amount, as their returns were not trustworthy.

In addition, the economy had recently been bad. The “post-war boom” did not begin immediately after the end of World War II, when the soldiers returned home. It took a few years to arrive. In 1950, the country’s gross domestic product was slightly below its 1945 level, although production had grown slowly over the previous three years. Investors could therefore have been pardoned for thinking that economic weakness was a greater global danger than overheating.

However… the point of this review is not to place us completely in the past, but rather to appreciate why our predecessors believed as they did, before stepping back to consider the situation dispassionately. Could another powerful recession have occurred? Of course, it could have. Did the investment prices overly take this possibility into account? They certainly had. The numbers suggested buying a lot of stocks, then buying more.

Over the next 30 years, shares of large U.S. companies rose 10.85% annually, while long-term government bonds rose 2.27%. This is the charitable point of view. The less charitable approach is to factor in the cumulative, inflation-adjusted performance of each asset. In real terms, large stocks have earned $ 5.73 over those three decades for every dollar invested. Meanwhile, long bonds lost 41% of their value. Ouch.

By the end of the period, when the 1980s arrived, valuations had shifted. 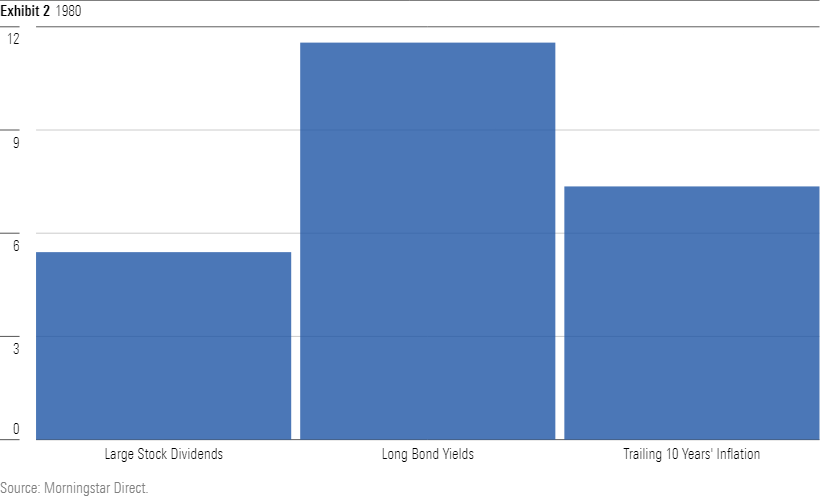 What a difference 30 years have made. Long government bonds have fallen from a quarter of equity returns to double their amount. Investors no longer feared the recession more than inflation. Although the former remains a concern, inflation has become the main threat. Therefore, bondholders demanded a substantial premium. While in 1950 long-term government bonds yielded 3 percentage points less than the inflation rate of the previous decade, in 1980 they were paying 4 percentage points more. The bonds had a large margin of safety.

Once again, investors of the time had their reasons. Inflation had calmed down for some time before crossing the 4% mark again in 1968. From that point on, it kept rising and does not seem to want to stop. It exceeded 12% in 1974, declined somewhat as oil prices stabilized, then rose again in 1979, exceeding 13%. From this perspective, a bond yield of 11% did not necessarily seem excessive to them.

Me neither, given the information available. In 1980, there was a good chance that inflation would continue to rise as global governments were unable to protect their currencies. Therefore, I do not see this period as presenting a clear investment opportunity. That said, if inflation were to be beaten, stocks and bonds were valued generously.

And that’s what they did. From 1980 to 2009, large stocks returned 11.12% per year in nominal terms and 7.45% in real terms. Adjusted for inflation, they outperformed their previous performance. This time, however, long bonds followed suit. Instead of losing real money, as had happened in the previous 30 years, they gained an annualized rate of 5.93% after inflation, which led to a cumulative real return of 462%.

Now for current markets. What do they signal to the disinterested observer? 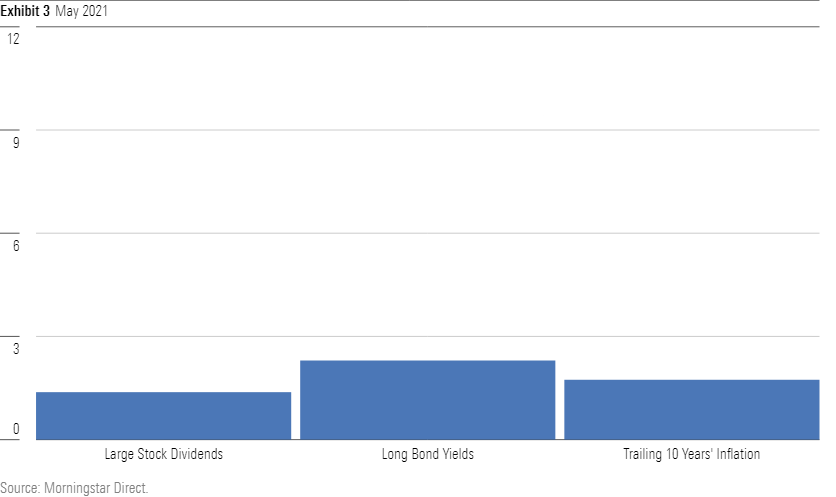 Shares are undoubtedly expensive. It was not until 1999-2001 that their yields declined. We can defend their valuations by invoking the low inflation rate of the last decade, but that would violate the terms of this exercise, which is to avoid being swayed by current arguments. The bigger picture breeds skepticism. In 1950, investors were not discouraged by inflation. They were wrong. Thirty years later, they feared him. Also wrong. Now they are optimistic. Such confidence is not convincing.

While the outlook for equities is mixed, it is at least outperforming bonds. If inflation returns to the average, stock prices will suffer, but after a while companies will compensate by raising their prices, as they did in the 1970s and 1980s. government bonds, which lost their margin of safety in 1980. If inflation resurfaces, they will be blitzed. Even if they don’t, they’re likely to be lower than stocks, probably by a lot.

In summary, taking a broad perspective offers an unambiguous verdict on investing today: better stocks than bonds. Stocks are not as attractive as they were in 1950; at today’s prices, they don’t represent that kind of opportunity. But the competition is not a draw either, as it was in 1980. The odds are now clearly in favor of equities.

To view this article, become a Morningstar Basic member.